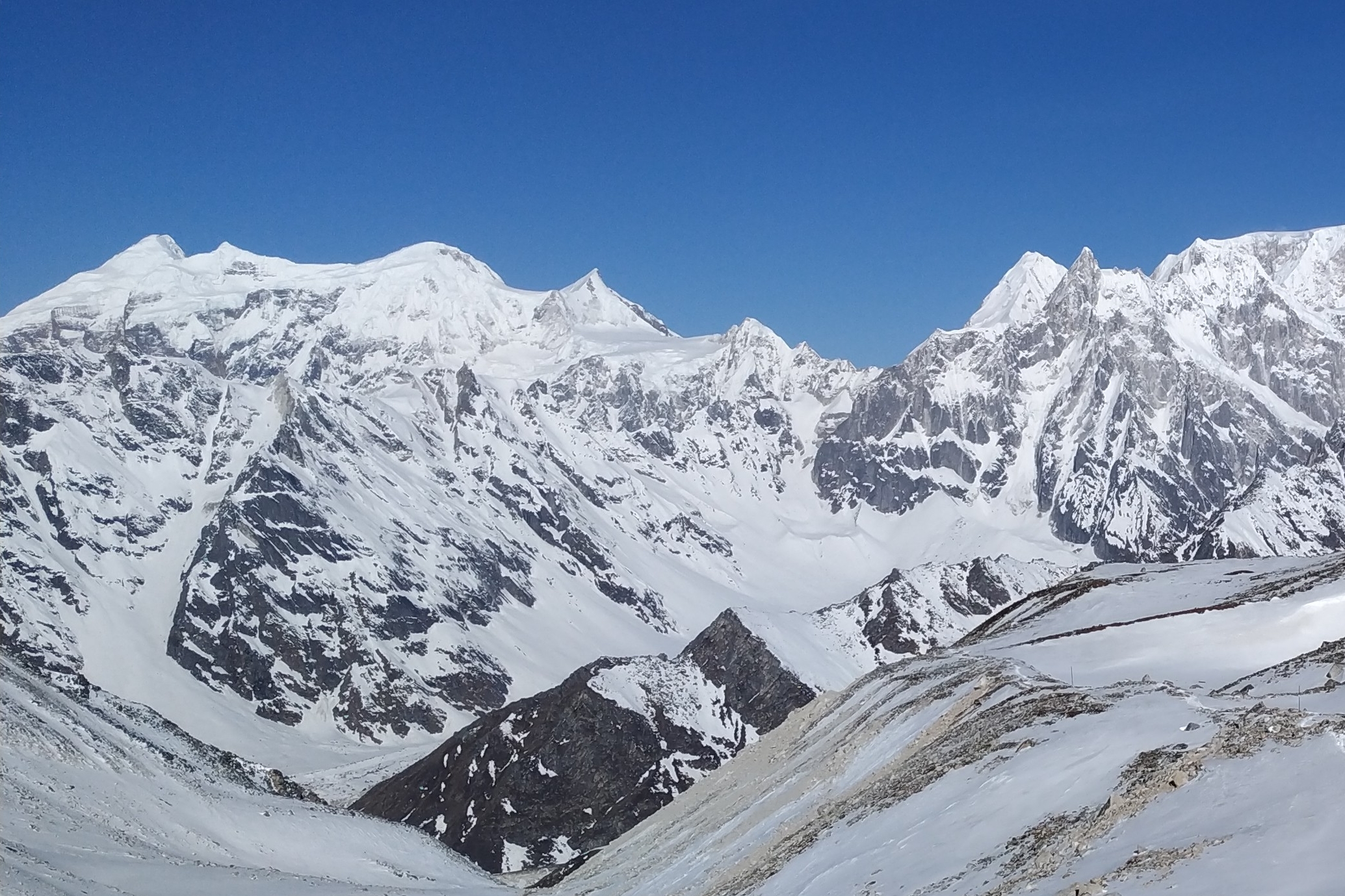 Pisang Peak is one of the non-expedition peaks in Nepal in the middle of the mountain giants Annapurna and Manaslu. Pisang Peak transcends from Pisang town and yak pastures in a uniform slant of ice and snow to its summit. This peak is considered a simple climbing peak in Nepal. To get to the base camp from Pisang town, the trail climbs through meager wood and field to a Kharka at 4,380m which is viewed as the best place for setting up the base camp. Our high camp will be set up at an altitude of 5,400m on the South-West Ridge. High camp is mostly covered by snow during Spring and Autumn.
The very much characterized edge prompts the last snow slope, which is very steep but not hard to achieve the summit. Plummet is made on a similar trail. This peak climbing trek, after all, is hard to coordinate for its tough mountain landscape. Beginning in the marsh paddy handle the trek relentlessly gains height going through oak and pine woodlands and in the end rising into a high desert nation at Manang 3597m. The plunge is similarly stunning and fluctuated. Strenuous trekking is all around remunerated at both low and high elevations, on the way to deal with the Thorung La Pass. Diverse biological communities, different societies, and a consistently changing scene – rich, green paddy fields and oak woodlands, dry deserts, and the most profound crevasse on the planet make this peak climbing trek stands out among the most prominent treks on earth.

You arrive at Tribhuwan International Airport. Glacier Nepal treks representative welcomes you at the airport and takes you to the hotel by privet vehicle. After a short rest, You will meet the guide at our office. you may have some questions about trekking he will give you an answer to the question. Overnight at the hotel.

After having breakfast we will drive by road from Kathmandu to Chamje village which will be the starting point of our treks. Chamje is a small village elevation of about 1430 m and from here we can see a view of the waterfall is on the other side. Overnight at Chamje.

After having breakfast we start the trek early in the morning we trek through the waterfalls, terraces fields,s and forest after Chamje we need to cross the suspension bridge and gradually up to Tal from Tal we enter the Manang district after Tal we also pass through koto village and walk on the trail cross another bridge reach Dharapani this village biggest village in this Annapurna region. Overnight at Dharapani.

After having breakfast today we need to walk the forest and several landslides on the way to Chame. Ascend up to Timang village from Timang remarkable view of Annapurna-2, Lamjung Himal, Manasulu after that reach to Chame the headquarters of Manag District there hot spring also we can enjoy and relax for a while. Overnight at Chame

After having breakfast today our trail continues up and down passing rivers and villages. We walk through the steep to reach Paung Danda from where we can see the views of Pisang Peak to the north side and Annapurna second then descend from there to Manang valley with Marsyangdi to reach lower Pisang. Overnight at Pisang.

Today we have rest day to acclimatization, we can visit Upper Pisang Gopma, we have view of Annnapurna and Tlicho  from the Upper Pisang. After exploring the village, last min cheak gear before we climb up to base camp. Overnight at Pisang.

After the breakfast, we ascend to Piasng base camp. its long way up passing a Yak shelter area during the summer, we can take short break to enjoy the view of Annapurna and Gangapurna. we have our lunch at tent. We will stay at tent at night.

To go to the  high camp is another one km up from the basecamp. We strat our trek after the breakfast, we walk on the rocky mountain ridge,for next few hours. after the lunch our climbing guide will provide you basic climbing training and techniques and the proper ways of using climbing gears. Overnight at High camp.

Today is biggest day of the trip, we start our trek early in the morning. We walk through the rocky surface. we need to climb with rope aroung 200m before the summit, we have ramarkable view of Mt. Annapurna, Gangapurna, Manaslu and Tilicho peak and many more.. After the summit we wil down back to Base camp.over night at Base camp

After the breakfast, we descend to pisang then we will take a upper trail via Geru. from Geru magnificent views of Annapurna, Pisang, and other mountains too. We descend and cross the bridge to reach Barge. There is the biggest monastery in Manang district we can visit. Ascend about 45 minutes to reach Manang village. Overnight at Manang.

After the breakfast, we left biggest and beautiful village manang. After passing the old real village, we climb  up to Tanki Manang, then we turn to right gradually up to Ghunsa. we will teke short break for tea enjoying the view of Mt. Gangapurna and Annapurna, afterthe short break we head to to Yak Kharka. Overnight at Yak Kharka.

After having breakfast we walk about 45 minutes uphill and cross the suspension bridge to reach Ladar there are few hotels. we ascend and cross the river past the landslide before reaching Thorong Phedi this time hotel in a high camp also but we choose to stay at Phedi. Overnight at Phedi.

Today we take breakfast early in the morning. we have a steep climb up to high camp after that gradually up to the top. Thorong la pass is one of the highest passes in the world and is a very famous pass for tourists. when we make it to the top, we can take a few photos and have a drink of tea when we descend views of Dhaulagiri, Muktinath valley, mustang valley, and Muktinath temple very famous for Hindus. Overnight at Muktinath.

To early in the morning visit the Muktinath temple there are 108 taps and streams above the temple. we can enjoy the view of Dhaulagiri after having breakfast and descend from Ekle Bhati over to Jomsom through the Kali Gandaki river and windy areas before reaching Jomsom. Overnight at Jomsom.

After having breakfast we fly to Pokhara with spectacular views of Dhaulagiri, Annapurna South, Fishtail, and Himchuli. Afternoon we can take a boat ride and visit the Davis Falls evening visit around the lakeside for buying souvenirs.

Pokhara to Kathmandu After breakfast we leave at 7.30 by tourist bus it takes 6 to 7 hrs. Upon reaching Kathmandu, you can utilize your time for last-minute shopping or you can explore the city. We celebrate the Farewell Dinner together with us and spend overnight at the hotel.

This is your final day in Nepal Glacier Nepal treks representative will drop you to Tribhuwan international airport by privet vehicle. Home sweet home. 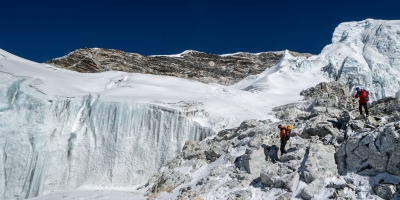 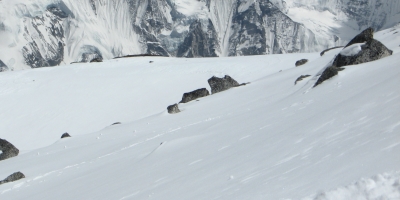 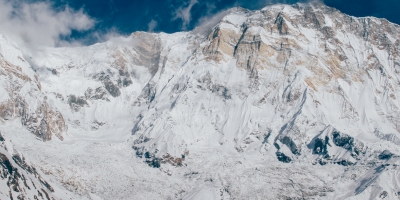